Beta-sitosterol is in your diet in common foods we eat every day but only in small amounts. It is considered safe and without serious side effects.

There are distinct structural differences between the above three plant sterols.
In the case of prostate health, it is beta-sitosterol that has been studied and reported to provide relief with respect to the symptoms associated with an enlarged prostate.

It should be noted that the FDA allows manufacturers to claim that foods containing plant sterol esters such as beta-sitosterol are for reducing the risk of coronary heart disease (CHD). This rule is based on the FDA's conclusion that plant sterol esters may reduce the risk of CHD by lowering blood cholesterol levels. The FDA has requirements for a minimum daily dose is at least 1.3 grams (1200 mg) of beta-sitosterol daily. In addition the beta-sitosterol should be taken .5 to 1 hours before the meal in divided dosages.

Known side effects for Beta-sitosterol have been reported in a small group of individuals that are hypersensitive to the ingredient Beta-sitosterol.  The side effect reported is generally a rash with itching.  If these side effects are experienced one should discontinue the product. Individuals who take 3000 to 4000 mg per day have reported nausea, indigestion, gas, diarrhea or constipation.

Prostate enlargement is becoming increasingly common as men are living longer lives. About 30 million men suffer from benign prostatic hypertrophy (BPH). BPH is the most common disorder of the prostate1 and it is the most common diagnosis by urologists for male patients age 45-74.2 There is a 50 percent chance that you will have prostate problems or symptoms by the time you are 60.3 Each year more than 500,000 men in North America have prostate surgery; and more than a billion dollars a year is spent on the treatment of prostate problems. Prostate surgery often results in both incontinence and impotence and can result in men living a life without sexual intercourse. Unfortunately studies have confirmed that saw palmetto is not an effective remedy for enlarged prostate based upon information published by: Bent S, Kane C, et al. "Saw palmetto for benign prostatic hyperplasia." New England Journal of Medicine, 2006; 354:557-66. The green buttons to the left provide additional information with respect to beta-sitosterol, the prostate gland, saw palmetto, and a comparison of prostate supplements.

Beta-Sitosterol has been recommended by physicians in Europe for over 35 years as a natural supplement to promote prostate health.

Helps to reduce waking at night due to constant urge to urinate*4
Helps to Increase Urinary Flow and Promotes Healthy Urinary Function*5,6
Promotes a Healthy Prostate*4,5,6
Beta-sitosterol has shown benefit in relieving the symptoms of an Enlarged Prostate* 7
Many prostate supplements contain saw palmetto, Pygeum africanum, pumpkin seed oil, stinging nettles, and other plant compounds. The fact is that these ingredients have one thing in common and that is beta-sitosterol.
Saw Palmetto itself contains a small amount of beta-sitosterol in comparison to the amount of beta-sitiosterol that is made available by manufacturers of beta-sitosterol. It is said that the amount of saw palmetto required to achieve 300 mg of Beta-sitosterol would be in the hundreds of capsules. 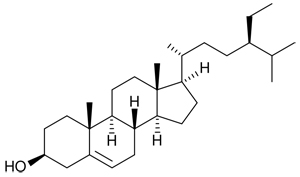 The following from excerpt was published by:
LE Magazine Special Edition, Winter 2005/2006
Beta-Sitosterol and the Aging Prostate Gland
by Stephen B. Strum, MD, FACP, and William Faloon

“Remarkable Effects of Beta-Sitosterol"
In a randomized, double-blind, placebo-controlled, multicenter study of 200 men with benign prostate enlargement, half the group received 180 mg of Beta-Sitosterol daily, while the other half received placebo.

After six months, the Beta-Sitosterol group saw improvement in the International Prostate Symptom Score, the measurement of urine flow (Qmax), and the amount of residual urine remaining in the bladder (PVR).1

The Beta-Sitosterol group showed a 7.4-point decrease in the International Prostate Symptom Score, compared to a decrease of only 2.1 points in the placebo group. This was a significant 3.5-fold improvement in the men taking Beta-Sitosterol (Figure 1).1

In a follow-up study that evaluated durability of response to Beta-Sitosterol, the beneficial effects for Beta-Sitosterol were found to be maintained during an additional 18 months of observation.2

To confirm these remarkable effects of Beta-Sitosterol, another study was performed and the results were published in the British Journal of Urology. The study involved 177 patients with benign prostate enlargement. Patients received 130 mg of Beta-Sitosterol each day and were monitored for more than six months. Measurements of the International Prostate Symptom Score, urinary flow, and residual urine in the bladder after voiding were recorded.3

On average, urinary flow values increased by 4.5 ml/second while residual urine volumes decreased by a substantial 33.5 ml. The International Prostate Symptom Scores showed a statistically significant improvement. These results with Beta-Sitosterol are comparable to those seen with the commonly prescribed drug Proscar®, used to treat benign prostate enlargement.3

The magnitude of reduction in prostate symptoms and improvement in urinary flow rates is a strong incentive for the use of Beta-Sitosterol, either alone or in combination with standard pharmacologic interventions such as alpha-adrenergic blockers (Cardura®, Hytrin®, Uroxatral®, Flomax®) or 5-alpha reductase inhibitors (Proscar®, Avodart®).

Conclusion
As men grow older, cells in their prostate glands often overgrow, causing a swelling that obstructs the bladder opening, resulting in slowness in urination and bladder emptying. This non-malignant enlargement of the prostate gland causes pressure on the urethra, acting like a clamp. The result is a weak urinary stream, hesitancy, and other uncomfortable urinary symptoms such as increased nighttime frequency and urgency. See Figure 3.

For millions of men in America, benign prostate enlargement will severely downgrade their quality of life. Yet across the ocean are drugs that have been shown in carefully controlled studies to alleviate much of the discomfort associated with prostate gland overgrowth.

Europeans use Beta-Sitosterol by itself or in combination with saw palmetto to alleviateurinary symptoms of benign prostate enlargement.

As the word gets out about the documented benefits of Beta-Sitosterol, American consumers can expect to see more prostate support products that contain this low-cost plant sterol. 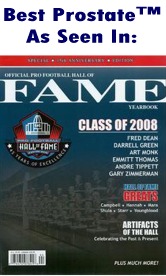